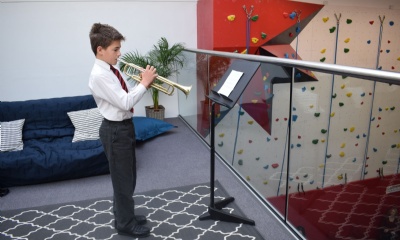 I hope you have been able to visit school this week and see the work that has been completed over half term. It is quite amazing to think that before half term we had an exposed steel beam at one end of the hall and at the other end we had a big wooden board shutting off our view of the proposed library. In two short weeks the builders have been able to complete the library construction including the amazing glass front, Mr Oastler has laid the flooring and Mrs Hamidon has been busy working with the librarians to fill the bookshelves. In addition, the other end of the hall has had the steel beam made into a new room, which at the moment is only a shell but hopefully at Christmas it will be turned into two useful working spaces. A big thank you to everybody who has been involved in completing this project and I know that boys will benefit immensely from this fantastic new flexible learning space above our heads.

On Tuesday, I was out of school at a conference at Wellington College in Berkshire. The title of the conference was ‘What the best schools know’, delivered by the world-renowned educational researcher, Professor John Hattie. He has been at the forefront of educational research over the past 20 years, which has resulted in the biggest ever meta-analysis of research into what works best in schools with regard to attainment. It was fascinating to listen to the professor and I certainly took away many key messages from his research, which I hope to implement at Willington over the coming terms and years. If you are interested in this topic, you can hear him speak on the BBC website https://www.bbc.co.uk/programmes/b04dmxwl.

Tuesday night saw our first Parents’ Evening of the year for Year 7 and it was good for the teachers to get a chance to share the pupils’ successes and progress with their parents. It was nice to catch up with POW during the week and discuss how the Parents of Willington can work with the school to make it a better learning environment. I am really appreciative of all the work the parents do for the school I know the boys will benefit immensely from their input. Day in, day out the boys are already experiencing the interactive whiteboards that the parents have supported in previous years and it is hard to measure the impact that this will have on the boys in the long term. If their enthusiasm is anything to go by, then it is clear it is having a huge benefit.

With Remembrance Sunday being this weekend, the school marked the end of the Great War on Friday with a very moving two minutes’ silence at 11 o’clock. The Last Post was played superbly by Harry. Listening to Radio 4 this morning on the way to work, there were stories from the end of the war, one of which included a lady who was celebrating in her town centre the end of the war with the church bells ringing out. When she returned home, she received a telegram telling her that her son had been killed in the last few days of the war. It is difficult to imagine the suffering that the generation endured and we must always remember them.